What Is Double VPN And When Will You Need To Use It?

We’ve seen a lot of important features that a VPN should have to make sure you’re hundred percent secure on the web. But what do we know about Double VPN? Well, it works just as same as the normal VPN. But instead of passing your traffic through a single VPN server, Double VPN uses two VPN servers. 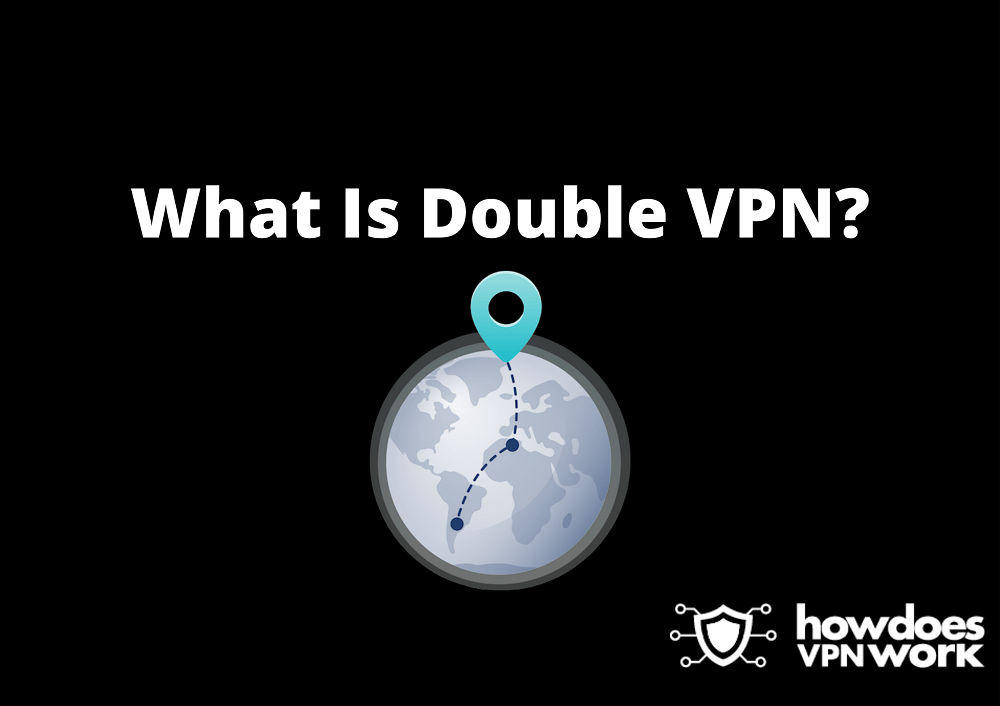 Let’s see more about what is Double VPN, how it works, and whether you should be using it frequently or not.

Short on time? Here’s a Short Summary of What is Double VPN

What Is Double VPN?

Double VPN is a VPN feature that allows you to route your internet traffic through two VPN servers. It can be useful if you want to maximize your internet security with an additional layer of protection.

But comparing it with a regular VPN connection, Double VPN limits your choice for picking VPN servers, you just have to choose what’s available.

Moreover, it can slow down your internet. Looking at how VPNs work, your traffic does a detour, gets encrypted from the VPN server, and then reaches the destination. But with the Double VPN feature on, the journey for your traffic becomes longer as it has to travel through two VPN servers now.

But still, it’s a useful feature. Especially for those who require extra safety on the web while doing their day-to-day jobs.

How Does Double VPN Work?

That was how a normal VPN connection would work. Now the case for double VPN.

And this is how your internet traffic is encrypted twice from two different VPN servers and the destination page sees the IP address of VPN server 2.

Which One Is Safer? Regular VPN Or Double VPN? 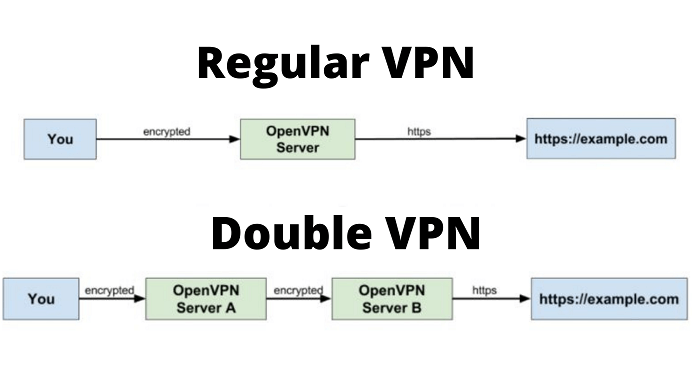 Double VPN is definitely safer. Your traffic is being encrypted twice. Unfortunately, some VPN providers don’t really encrypt users’ traffic twice. But even if this is the case here, your IP address is still hidden behind two VPN servers.

There are two VPN servers involved in encrypting. So basically both the servers only have partial information full information about you because of the data split.

So yes, Double VPN is safe. But make sure you sign up for a reliable VPN provider that has a strict no-logs policy because you don’t want to hide your traffic from your internet service provider and give it to your VPN service provider.

When Is Double VPN Required?

A regular VPN is just fine for you to carry out your normal activities but some scenarios are different, for which the Double VPN feature can save the day.

What Is VPN Over VPN? 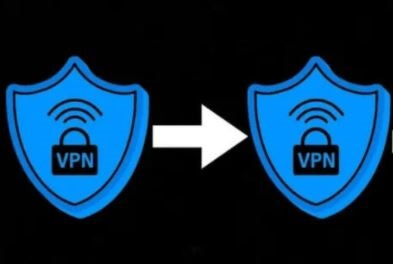 It’s actually a good idea if it works. Because let’s imagine if your VPN provider logs customer data and you use the Double VPN feature to run all your traffic through it, then it’s a dead-end.

But running two separate VPNs simultaneously can cost you double the price. And plus, it’s not guaranteed that you’ll be able to run two VPN apps simultaneously as the providers don’t build their programs this way.

So the better option would be to get a VPN subscription from a reliable VPN provider that offers the Double VPN feature. Don’t just take the VPN service’s word for it, search for reviews, or check if they’ve been audited by third-party firms.

What Is Onion Over VPN?

Onion over VPN is when you combine a VPN server with a Tor browser to maximize your security. You can either use NordVPN’s Onion over VPN feature or choose the manual way of doing it with any reliable VPN service.

For the manual process, just connect to a VPN server and then use the Tor browser.

To tell you how it works, the VPN app first encrypts your traffic and routes it through the VPN server, hiding your IP address. Then your traffic enters The Onion Network by the entry node or first node where your traffic is encrypted again and then it exits and reaches the destination with maximum privacy.

Double VPN can strengthen the encryption process and anonymize your online identity better on the internet. But it’s not a compulsory feature to have. You can still easily manage to geo-spoof your location or change your Netflix region even with a regular VPN connection.

Most VPN providers don’t even offer this feature and they might not have any plans to introduce it in the future. But why is that? Let’s find out.

Although it’s a great feature to have if you require some extra safety on the internet, it certainly isn’t the best choice for carrying out your normal everyday activities.

Other Features To Have Along With Double VPN 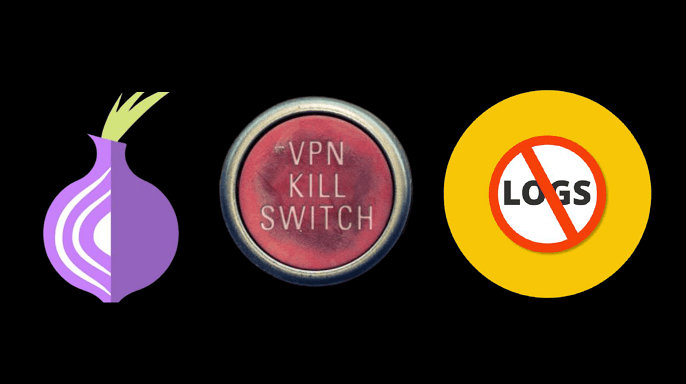 As powerful as the Double VPN feature is, it alone cannot save your online identity from exposing on the web. Although it eliminates all the chances of you being attacked since it encrypts your traffic twice but there can be other loopholes.

First of all, your VPN provider must have a strict no-log policy. Because you don’t want to end up escaping one threat and then hand your entire internet history to some other party.

Secondly, only sign up for a VPN if the service provider offers a kill-switch feature. This feature can come in handy when your VPN drops accidentally. While offline, the kill switch feature will terminate your internet connection and only restore it when your VPN connection gets back online.

In the end, Tor over VPN feature. It’s not a primary should-have feature but still, it can work as a substitute for Double VPN.

As we have realized that searching for a reliable option that offers this amazing feature can be tricky. So we have done the leg work for you. These VPNs offer the Double VPN feature and they are the best in business.

NordVPN is a Panama-based company. You can use 6 devices simultaneously with a single subscription. It has a server count of 5200 in 60 countries, and it works great with Netflix.

The NordVPN Double VPN feature is available for Windows, Mac, and Android apps. And here’s how you can use it.

The Double VPN feature of Surfshark is called MultiHop. It works on all major operating systems including Windows, Mac, Android, and iOS.

Is Double VPN a necessary feature to have?

No. You don’t need Double VPN for your everyday tasks. It is only needed when you’re in need of greater security on the web or when your line of work requires maximum anonymity while surfing the internet.

What if my VPN doesn't offer a Double VPN feature?

If you don’t have a Double VPN feature then you can still route your traffic through two VPN servers. Simply use two separate VPNs simultaneously. But if you’re not able to do that, then use Onion over VPN.

Is it okay to use two separate VPNs at the same time?

It’s not guaranteed that you’ll be able to use two separate VPN provider apps simultaneously to route your traffic through two VPN servers. Because some providers are not compatible to run programs in parallel with other VPN apps.

The secure and reliable options for a VPN provider that also offers the Double VPN feature are NordVPN, Surfshark, and ProtonVPN.

Should I use Double VPN all the time?

No. You don’t need to use Double VPN all the time. A regular VPN connection will work just fine to carry out your normal activities. Double VPN is only when you require greater protection on the internet.

Yes, it is possible that you might witness a decrease in speed while using the Double VPN feature. As your traffic is being sent to two different VPN servers, the journey gets extended for your traffic and thus, it decreases your internet speed.

Can I use Onion over VPN with Double VPN?

It is possible to use both the feature together but not recommended. When you use any one of these, your speed starts to decrease as your traffic has to hop through different checkpoints. And using both these features will just turn your internet into a snail.

Double VPN is a mighty feature but it is safe to say that you won’t need it for everyday internet usage. Unless you’re a journalist or an activist working on a sensitive topic, this feature can come in handy to maximize your anonymity on the web. Other than that, a regular VPN connection will work just fine.