How to Install ExpressVPN On PS4? [Updated April 2022] 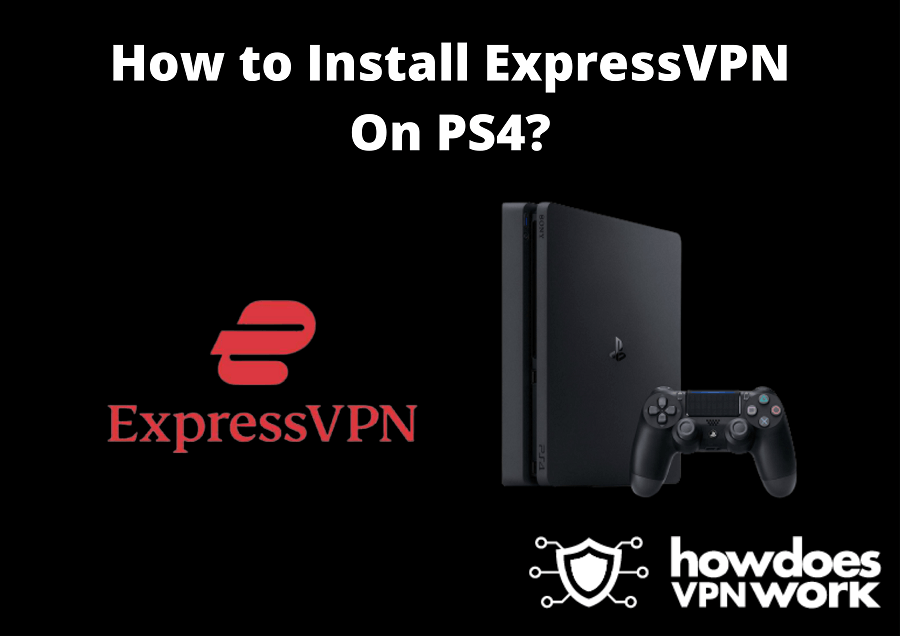 In this article, we tell you how to install ExpressVPN on PS4 so you can break the barriers of geo-restrictions while gaming.

A VPN (Virtual private network) changes your online location which tricks your gaming console into thinking you’re accessing or buying a game from that region, hence internet freedom!

However, you cannot install a VPN directly on your gaming console as Sony’s PS4 is not compatible with VPNs. But still, we can make it work with other methods like creating a virtual router from your computer and sharing that connection to your PS4 or directly installing ExpressVPN on your router.

Don’t worry, it’s not that difficult. All you need is the right resources and some tech awareness. Plus, we’ll guide you through the overall process with step-by-step guidelines.

So without further ado, let’s jump onto the process.

Short on time? Here’s a Short Summary of How to Install ExpressVPN On PS4

ExpressVPN is the best choice for your PS4 console if you’re looking to bypass geo-restriction on games or beat dynamic prices. You cannot install it directly on your gaming console as Sony doesn’t support VPNs. However, you can install ExpressVPN in the following ways.

For more information, check out our ExpressVPN review: How Does ExpressVPN Work

How to Install ExpressVPN On PS4?

You cannot install ExpressVPN on your Playstation console directly. However, there are other ways from which you can set up a VPN on PS4 and trick it into being in another region.

How to Install ExpressVPN On PS4 Using a Router?

With ExpressVPN’s dedicated app for routers, you can easily set up a VPN and bypass geo-restrictions on your PS4 console.

You’ll also be able to cover other devices like Firestick, Roku, or Chromecast. In short, you’ll cover all the devices that can connect to the internet, including your Smart Fridge and Security Cameras.

Check first if your router has the capability to host a VPN server. If it doesn’t, check if it has compatibility for DD-WRT, Tomato, or any other firmware that can enable the VPN feature for your router.

If everything is on track, flash your router’s firmware. Flashing is basically a process that changes your router’s operating system to enable the VPN feature.

However, it can be risky for your router if you’re not doing it properly. Because messing up mid-process can damage your router’s normal functionality. So you have to be hundred percent sure what you’re doing.

ExpressVPN works best if you have a Netgear, Asus, or Linksys router. But you can still install ExpressVPN using Manual Configuration if you have a router other than these three.

To know the step-by-step process, follow our dedicated guide: How to Install ExpressVPN On A Router

How to Install ExpressVPN On PS4 By Using Your Computer?

In this method, we will use our VPN-enabled Windows or Mac PC to create a virtual router and connect our PS4 console to it.

You will need an Ethernet cable and an active ExpressVPN subscription plan.

Connect one end of the Ethernet cable to your Windows computer and the other end to your PS4 console. Then follow these steps.

Step 1: On your computer, go to the Settings and head to Network & Internet. 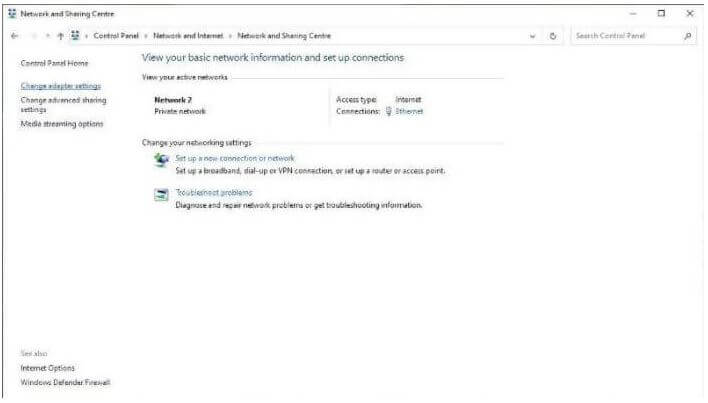 Step 3: Find ExpressVPN TAP Adapter and right-click on it. Go to the Properties.

Step 4: Head to the Sharing tab and check the box that says “Allow other network users to connect through this computer’s internet connection“. 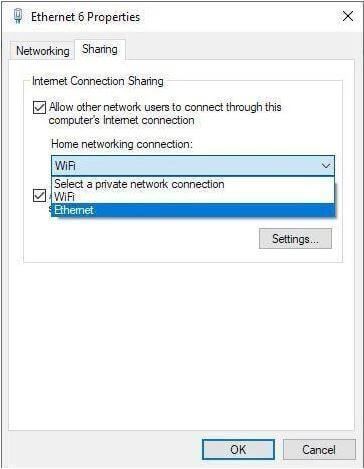 Step 6: Launch ExpressVPN and connect to a VPN server.

Step 7: On your PS4 console, go to the Settings and head to Network Settings.

Step 8: Select Setup Internet Connection and then select Use a LAN Cable.

Step 9: Select the Easy Connection method and then select Do Not Use Proxy Server if prompted.

Step 10: Accept and save the settings. Test the connection. You’re all set.

If you’re using a Mac, follow the same drill. Connect one end of the Ethernet cable to your Mac and the other end to your PS4 console. Then follow the steps below.

Step 1: Go to the System Preferences and head to Sharing. Select Internet Sharing. 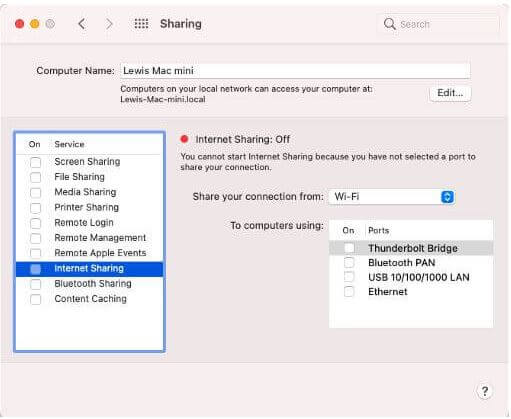 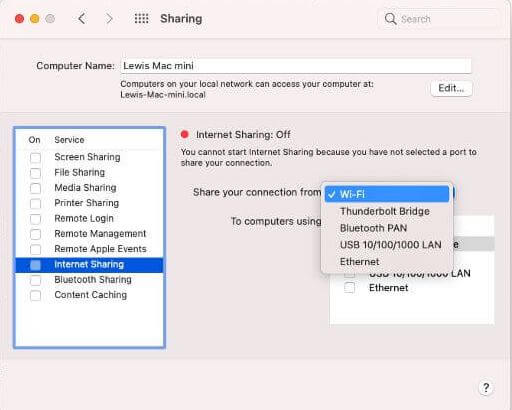 Step 3: Check the Ethernet box in the To computers using section. 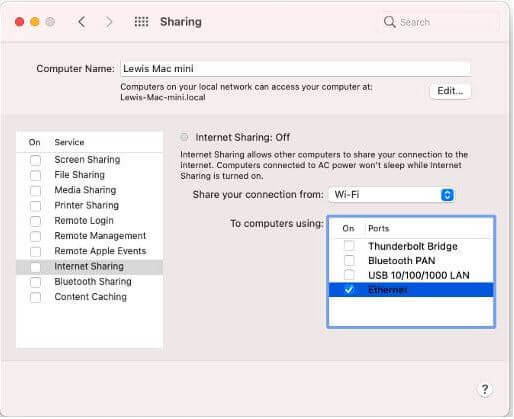 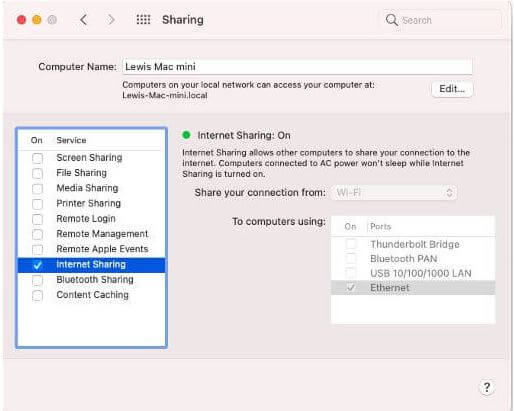 Step 6: On your PS4, go to the Settings and head to Network Settings.

Step 8: Select the Easy Connection method and choose Do Not Use a Proxy Server.

How to Install ExpressVPN On PS4 Via MediaStreamer?

MediaStreamer is one of ExpressVPN’s features that lets you access geo-blocked services without encrypting your traffic. It is a DNS service designed to make your streaming experience smoother.

But you can use it on your PS4 console to bypass geo-restrictions on games or apps. You can even use it for streaming by changing your Netflix region on PS4.

Here’s how you can set it up.

Step 3: Go to the ExpressVPN Setup Page for PS4. Or you can just click here. 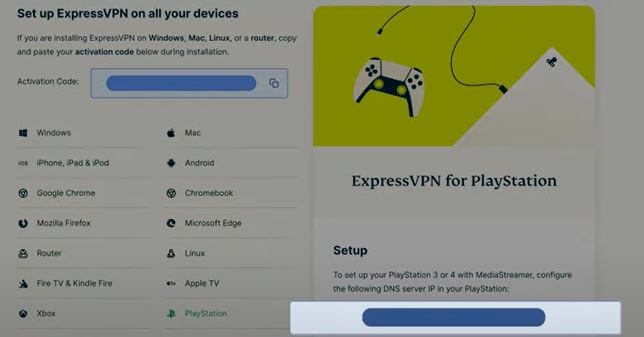 Step 5: On your PS4, go to the Settings and head to Network. Select Set Up Internet Connection.

Step 6: Select Use a LAN Cable and then choose Custom. 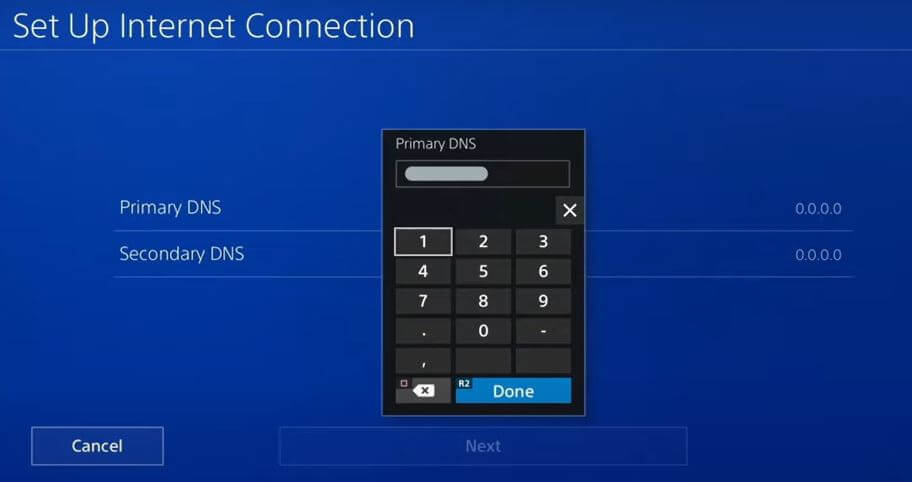 Step 10: For MTU Settings, select Automatic. For Proxy Server, select Do Not Use.

Step 12: Reboot your PS4. You can easily bypass geo-restrictions on your PS4 with MediaStreamer.

Why You Should Use ExpressVPN On PS4?

If you know how to use a VPN, you should definitely know why you’re using it and what are benefits you could extract from it.

Almost all VPN providers claim to be the best in business. But can you be sure of it? How will you set a benchmark?

Easy. Just sign up for ExpressVPN or use a trial version of it. And if you’re satisfied, best! But if you’re not happy with the services, take advantage of the 30-day money-back guarantee offer and you’ll get a refund of your money.

With ExpressVPN, you’ll get to route your traffic through advanced protocols like OpenVPN or L2TP/IPsec. Your online identity will always be secure as the 256-bit encryption method will eliminate hackers or any attacks following your tail.

But that’s only the security POV. What about the other main purposes of using a VPN on PS4? The first and foremost is bypassing the geo-restrictions. With ExpressVPN, you’ll be able to play games that are not even released in your region yet.

You just have to change your region and download the gaming title as soon as it releases in any region.

But will you find a server that can connect you to that region? Well, ExpressVPN has a total count of more than 3000 servers covering 94 countries. So finding a server will not be an issue.

You can beat dynamic pricing techniques. Before buying a game, connect to a region where you can get it at the cheapest price possible and you’ll save some bucks. Some of the regions you can connect to are Brazil and Turkey.

Lastly, ExpressVPN will make sure you have a magical gaming experience. Although it’s true that using a VPN takes up more of your internet which can cause jerks and lags. But with ExpressVPN’s fast servers, you’ll achieve a latency that’ll allow you to pull your sniper flick shots on enemies in the smoothest manner.

To set up ExpressVPN on other popular devices, also read:

Can I directly install ExpressVPN on PS4?

No. PS4 cannot run native VPN apps. You have to either install a VPN on your router or create a virtual router to use a VPN on your PS4 console.

Will a VPN affect my internet speed on PS4?

Using a VPN will surely decrease your speed as it has to travel through multiple channels. But ExpressVPN’s fast servers will make sure you maintain a low ping while gaming on your PS4 console.

Why can I not use a VPN on PS4 directly?

Gaming consoles like Xbox or PS4 don’t support native VPN apps. That’s because VPN services have an upper limit on how much bandwidth you can use. And because of less bandwidth, jerking and lagging can occur while playing a game which can be frustrating.

How can ExpressVPN improve my gaming?

ExpressVPN is a top-tier VPN service. Connecting to an ExpressVPN server will change your region and lower your ping on international servers to make sure you have a smooth and amazing gaming experience.

Can I use a free VPN on Xbox?

Free VPNs are not safe. They usually don’t work and even if they do, you cannot trust them with your private data.

Now you know how to install ExpressVPN on PS4, so change your region, beat geo-restrictions and dynamic prices. What method you choose depends on your gaming activity. If you want a permanent solution, probably go for installing ExpressVPN on your router option. But you can also create a virtual router or use the MediaStreamer feature too if you prefer.