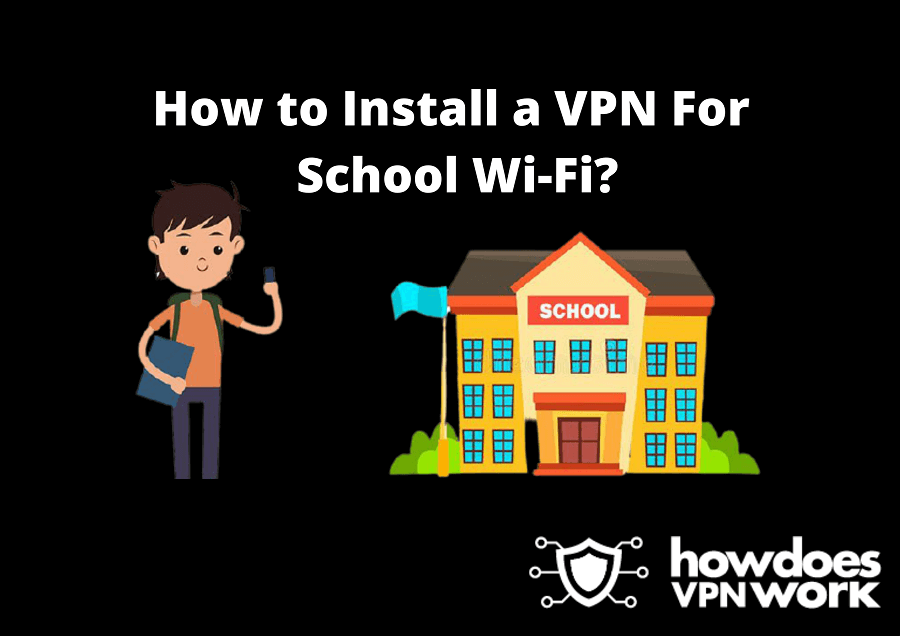 School and college Wi-Fi networks do not let you have access to everything on the internet. And it has all the valid reasons.

In this guide, we will tell you how to install a VPN for School Wi-Fi in the simplest way possible. Keep in mind that you should be using a top-tier paid VPN to have access to all the geo-restrictions across the web.

If all you do in school is scroll through your phone, watch videos on YouTube, or stream movies then you won’t be able to concentrate on your studies.

Although sometimes the restrictions seem to cross the line when you can’t even watch an educational video or have access to important notes on a third-party website.

This is when a VPN becomes important. A VPN creates a secure tunnel between the user and a VPN server which encrypts the connection and lets the user enjoy bypassing blocked websites in a matter of seconds.

But it’s not an in and out process to install a VPN for School Wi-Fi while you’re connected to it. There is a catch.

School Wi-Fi networks place heavy restrictions on VPN websites. So if you can’t access the website, how will you be able to sign up for a VPN?

So let us tell you how you can easily install a VPN for School Wi-Fi by following some steps and you’ll be able to access everything on the internet even if your school Wi-Fi restricts it.

Short on time? Here’s a Short Summary of How to Install a VPN For School Wi-Fi.

How to Install a VPN For School Wi-Fi On PC? 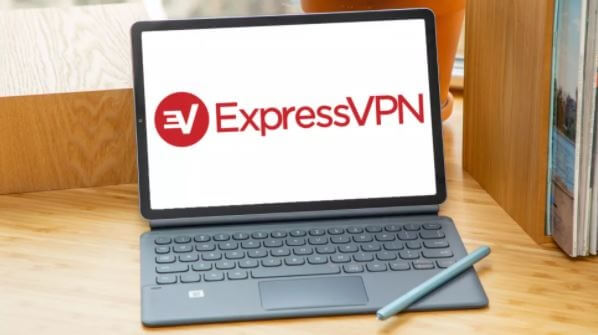 If you’re using a Windows PC or laptop, you’ll need to install a VPN first on your home network as your school Wi-Fi might not allow subscribing to a VPN.

How to Install a VPN For School Wi-Fi On Android or iOS? 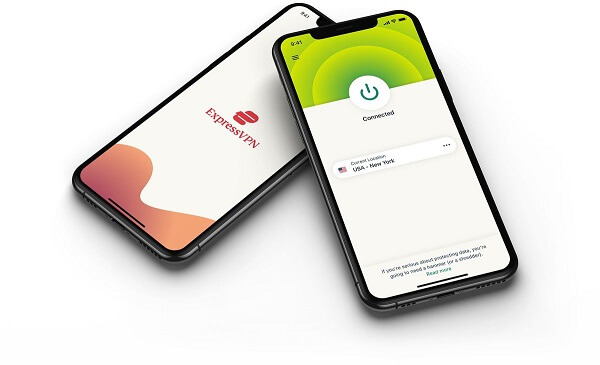 You have to sign up for a VPN first and download the VPN app on your phone using the Wi-Fi of your home network.

For more information, check out our detailed guide: How to Set Up a VPN On Windows, Mac, Android, & iOS.

How to Install a VPN For School Wi-Fi On Chromebook?

You have to make sure first that your Chromebook supports Android apps and Google Play Store is available in your Chromebook. Once you check that, follow these steps.

If your Chromebook doesn’t support Android apps or you are having trouble downloading your VPN app then visit our detailed guide: How to Install a VPN On Chromebook.

If you don’t have a VPN yet and you can’t sign up for a VPN subscription on your school network then that’s because your school has blocked the VPN websites and you won’t be able to access these websites while on that network.

But there are some ways from which you can crack this problem.

When you see that you can’t access a VPN website with your school Wi-Fi then switch your network connection to your mobile data, sign up for a VPN while being on that network, and connect to a VPN server. But make sure you have a data plan and you don’t end up losing all your credit.

Another way is to connect to a public Wi-Fi of a library or a coffee house nearby. Make sure you take care of your privacy and check if it’s a legit network as hackers can sometimes set up a bogus network to steal information. Once you connect to a VPN server, switch to your school’s Wi-Fi and have unrestricted access to blocked websites.

Why Should I Install a VPN For School Wi-Fi?

There are plenty of reasons why you should install a VPN for your school Wi-Fi.

At first, you don’t have any idea if your school network is secure or not. You might end up risking your private information if malicious attacks like ransomware, phishing, or malware find their way into your device, infecting all your files.

Secondly, schools and colleges impose major restrictions on half the internet. To avoid these restrictions, a VPN is the perfect tool to geo-spoof your location, tricking the blocked websites into thinking that you’re from somewhere else which gives you access to the unavailable content in a snap of a finger.

To set a VPN on almost any device, check out our detailed guide: How to Install a VPN.

And the reason for blocking these platforms and some others are plain and simple – to avoid distributed concentration. Let’s face it, a student wouldn’t be able to concentrate in class if he/she is texting or scrolling through their phone all the time.

So despite the annoying bans on almost everything, schools are actually doing it for the betterment of students.

But along with this process, sometimes the restrictions go too far. It gets frustrating when you can’t even watch an educational video on YouTube or download a tool to help you with classwork.

Moreover, blocks are also implied to stop students from torrenting or downloading, which might exhaust the bandwidth limit of the internet.

This is where a VPN comes into action. When you use a VPN, you can easily bypass restrictions by tricking the blocked websites into thinking that you’re from somewhere else while being on your school network.

How to Choose a VPN For School Wi-Fi?

Many VPNs claim to be the best in the market but only a few are to be trusted. Before signing up for a VPN service, make sure it has all the capabilities which you require. Although the primary factors to be considered are privacy, speed, security. But there are other secondary factors like a VPN having a strict no-log policy, a kill-switch, or a split-tunneling tool.

When you require downloading or streaming at school, you need speed. Or else you would be just staring at a loading screen. Make sure the VPN service you choose offers fast servers and unlimited bandwidth so you can carry out your activities with blazing speed.

Choose a VPN service that should make security the least of your problems so your hundred percent concentration is on your studies only. Always check if your VPN offers the latest encryption techniques and protocols. Find out the 256-bit encryption method and IKEv2/IPsec or OpenVPN protocol.

You should have your options for a good pool of servers. When a VPN service lacks in offering a decent amount of location servers then they get crowded, which results in slow bandwidth and speed. Sign up for a VPN that has a good server count across different countries in the world.

Every VPN company claims that it can unblock almost everything on the internet. But not all VPNs can bypass geo-restrictions. A good rule of thumb is to test the VPN service yourself first by taking advantage of the trial period or 30-day money-back guarantee offer. This way you’ll know for sure if it can unblock the content of your preference.

VPN companies have made things easier by introducing user-friendly apps for easy navigation through their app. Choose a VPN service that’s comfortable to look at and connects you to a VPN server in seconds.

The average pricing of VPNs is $12 to $13 a month. Most monthly plans of reliable VPNs fall in this range. However, if you sign up for their longer-term plans then you might save some bucks. Also, look out for holiday discounts.

It can be hectic to select a VPN service that is reliable and provides all the necessary features. We have compiled a list of VPNs that are a perfect match to unblock content on your school Wi-Fi.

ExpressVPN is based in the British Virgin Islands and it’s one of the old players in the VPN market.

It has a count of 3000 servers located in 94 different countries so you don’t have to worry about finding a decent connection any time.

It covers all major operating systems including Windows, Android, Mac, iOS, and Linux.

With its built-in kill switch called Network Lock, you don’t have to worry about accidentally exposing your real IP address in case your VPN connection drops.

One of the amazing things about ExpressVPN is that it offers a dedicated app for routers so if you have a device that has no support for native VPN apps then this feature can come in handy.

It offers a dedicated MediaStreamer tool for an amazing experience on streaming platforms like Netflix, Hulu, HBO Max, Amazon Prime Video, and many more.

NordVPN is a Panama-based VPN service where there are no data retention laws so it doesn’t log any of your data and it stays out of the fourteen eyes.

NordVPN has a simultaneous connection limit of 6 devices which means you can run six devices at a single time with a single NordVPN subscription.

There are plenty more built-in features offered by NordVPN that no ordinary VPN provider offers like Onion over VPN, double VPN, and CyberSec, which defends your computer or mobile from malicious attacks like malware and phishing.

Surfshark VPN is considered to be the most user-friendly VPN. It’s really easy to navigate through the Surfshark app.

One of the amazing features of Surfshark is that it doesn’t have a limit on simultaneous connections. You can connect as many devices as you want with a single Surfshark plan.

It’s not as old as the other VPN players of the market, but it certainly made its way in the top 10 VPNs of all time.

Surfshark offers some amazing features like Whitelister, a split-tunneling tool that lets you bypass the VPN connection.

Multi-Hop, which lets you encrypt your traffic through two or more VPN servers.

CleanWeb blocks ads and keeps other malicious activities away from you.

The monthly plan of Surfshark is $12.95 and the 24-month plan costs $60, which is the cheapest two-year plan offered by any top-tier VPN provider.

To install a VPN on popular devices, check out our detailed guides:

Should I use a free VPN on school Wi-Fi?

The use of free VPN services is not recommended as there are tons of restrictions and it’s not safe to use a free VPN as you might end up compromising your online privacy.

How much does a paid VPN cost?

A reliable paid VPN costs $12 to $13 for a month. And if you sign up for a longer-term plan, you might save some more bucks.

Is it legal to use a VPN?

Yes. It is legal to use a VPN in the US. However, some countries like China, North Korea, and Turkey have bans on VPNs. So check the government policy for VPNs when you visit somewhere to avoid trouble.

By now you should know how to install a VPN for School Wi-Fi and trick your school network into thinking you’re accessing it from somewhere else.

School Wi-Fi networks restrict almost half of the internet to keep the students focused on their studies. However, it can be bypassed if you use a VPN. A VPN tricks the network and you can easily have access to blocked websites in no time with maximized security.